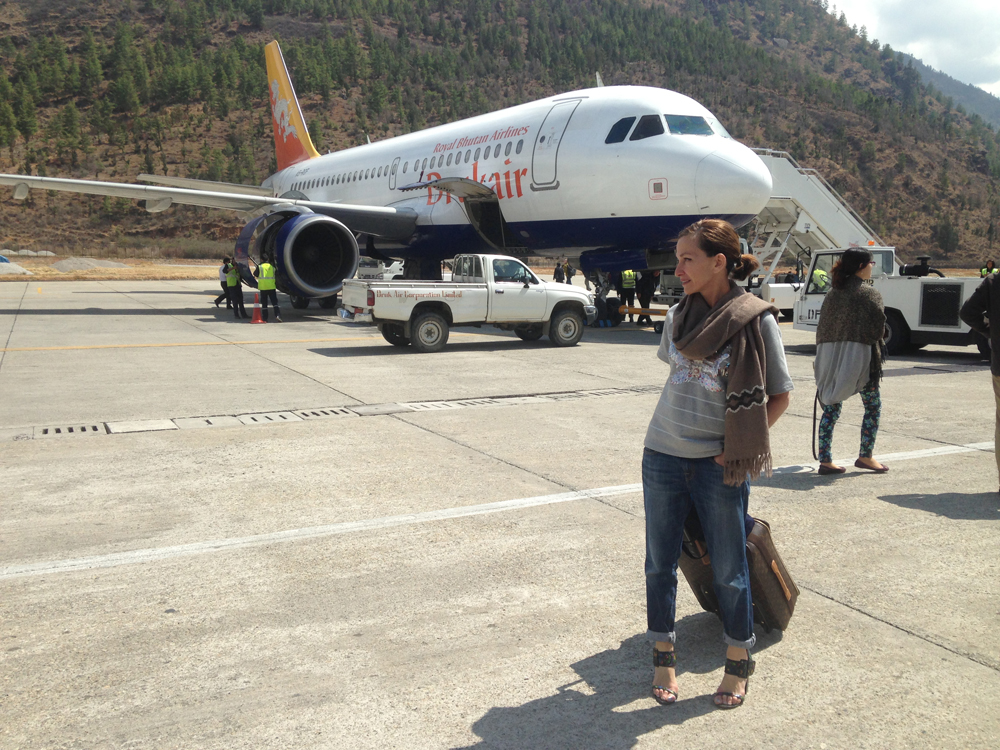 For most people spring break means Disney or Daytona. For me, I like to go off the grid and have a big adventure. A lot of people think having kids restricts your travel options, but I think it encourages you to be more imaginative. When kids are relatively young, you have a chance to expose them to the wonders of the world. It’s a chance to experience a culture first hand and to learn that you can pack for a 10-day trip in a carry-on. It’s every man for themselves in our family, even if you’re a nine-year-old.

When I was a kid, we spent summers driving around the country, camping in national parks, and living out of our family station wagon. While I prefer a more far-flung adventure now, the nomadic lifestyle was engraved early in my life and the family stories live on.

I wanted my kids to experience the adventure I had in an uncompromised culture that hasn’t changed in a thousand years. When I got to the Uma Paro hotel, I was so overcome with joy that I started to cry to the extreme embarrassment of my kids. If you’ve ever seen the movie Lost Horizon, where a group of people finds Shangri-La nestled in the Himalayas–this is Bhutan. Bhutan is a monarchy with a young king and queen that are so revered that every person in the country wears a pin with their picture. The country is so small (with a population of 700,000) that the Harvard/Oxford-educated King can make a rule and the entire country is on board. For instance, everyone must wear a traditional Bhutanese costume, the architecture is only traditional, Bhutanese buildings cannot be over six stories tall and photos cannot be taken in any of the temples or monasteries, so everything you see must be etched in your memory–no problem. They make a point of preserving their culture and their largest export is gross national happiness. All your negative prejudices about mankind are tossed out the window because everyone is genuinely nice, trustworthy, and gentle.

Days are spent after delicious early morning breakfast, thinking, driving on winding dirt roads with incredible vistas of the Himalayas and viewing specular historical landmarks like Tiger’s Nest, which is their crown jewel. Our trip to Tiger’s Nest ended up being an epic journey. We hiked to 13,000 feet, above the tree line and above the clouds to a campground where we pitched yak-hair tents, cooked traditional Bhutanese meals, slept in sleeping bags, and woke up at dawn to a cover of eight inches of snow. An overnight camp in the Himalayas is not for the faint of heart as my nine-year-old daughter, one of the youngest to climb the mountain, got altitude sickness and we all had to take turns bringing her down piggyback. All in all, we trekked around 12 hours over two days but by the time we got back to the comfort of our hotel, we realized this was a once in a lifetime family experience we will never forget. I guess we did go to the magic kingdom after all.

Insider Tips: Everything is off the beaten path in Bhutan with the exception of English being spoken by many Bhutanese. The country is so foreign and roads so dangerous that the best thing to do is book a hotel with a guide and driver. Staying at Uma Paro gave us a luxurious, but totally authentic cultural experience. The food at the hotel was outstanding! Best pancakes, interesting delicacies, and perfect service. The country is so culturally intact here and there aren’t really any local restaurants, even if you wanted to go exploring. The same goes for shopping–very limited. Visitors should bring home photos and memories, not junk! We camped and trekked and visited monasteries and monks and practiced archery during downtime.

Top photos: Cynthia Rowley at the airport in Bhutan. Only nine pilots in the whole world are allowed to fly into Bhutan’s national airport! Photos courtesy of Cynthia Rowley.

Jennifer Olvera has had a long, impressive career as an editor and dining critic for highly regarded publications and websites. She has...

Wndr Museum Redefines Museums and Is a Cool Art Experience for...

This past September, I arrived at the most beautiful place in Bali, where the birds sing and balance on windblown palm fronds and it's...