If you have the wanderlust inside of you and wouldn’t mind changing your entire itinerary, then this is for you. At the JFK Airport, Heineken set up a pop-up game called “Departure Roulette” where people were asked to press a red button for the chance to go to a secret random destination (completely paid for) with one condition, they will have to drop their current plans and go immediately somewhere new.

Most people had plans and did not want to change them, but the ones that were brave enough to take a chance were headed to places like Cyprus, Laos, Portugal, and Thailand.

The funniest part was when they called their family and friends saying they were canceling plans and heading to that new destination!

More wanderlusters might want to see this too: Expedia Luggage Tag Ad campaign 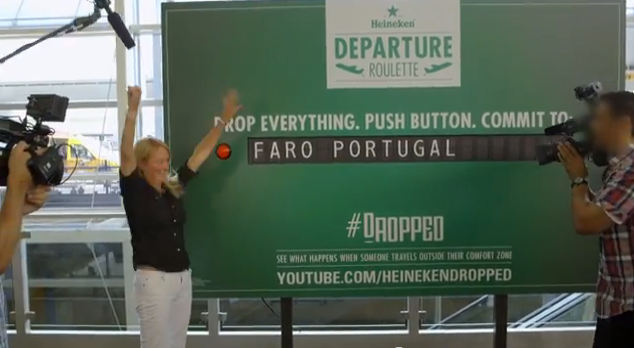 Travel Must-Haves Nobody Should Leave Home Without

The Top Travel Headlines From Around the Web

The Top Travel Headlines are: Video: First flying car is here, set to go on sale in 2015! Shock Mansion How a Women Flew Around...