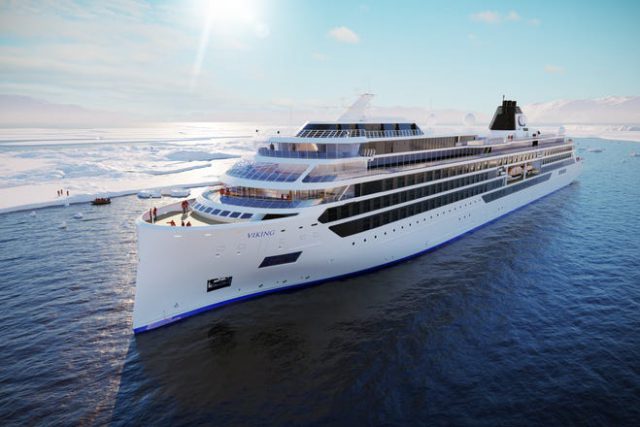 Luxury liner Viking is bringing its ultra-luxe cruises to the Great Lakes with plans to set sail in 2022. Viking Expeditions will begin sailing in January 2022 with its first vessel, Viking Octantis, which will entice guests to explore Michigan, Minnesota, Wisconsin, and Ontario with three unique cruises that feature eight days of exploration. The ships feature a Scandinavian design, accommodating 378 guests in 189 staterooms.

“We invented the concept of modern river cruising when we launched in 1997; then we reinvented ocean cruises and became the ‘World’s Best Ocean Cruise Line’ in our first year of operation, as well as every year since then. Now, in creating ‘the thinking person’s expedition,’ we are perfecting polar expedition cruising, and we will usher in a new era of comfortable exploration in the heart of North America,” said Torstein Hagen, Chairman of Viking. “Our guests are curious explorers. They want to continue traveling with us to familiar and iconic destinations, but they would also like to travel further. We began as Viking River Cruises; then we evolved into Viking Cruises with the addition of ocean cruises; today we stand singularly as Viking, offering destination-focused voyages on more than 20 rivers, five oceans and five Great Lakes, visiting 403 ports in 95 countries and on all seven continents.”

Here’s a look at some of the popular new Great Lakes cruises:

3 Upcoming Art Exhibits or Happenings to Experience in Chicago in...

It's no secret that this year has been challenging for most of us—and truth be told, things have been looking pretty dire for...

Take an Outdoor Class With Equinox at the New Box Shops—the...

CruiseComplete has created a round-up of the 46 sacred, spiritual or miraculous sites to visit while on a cruise ship. Check out their top...