On the island, plans are underway to build a number of stunning cultural centers. The plans, which include several museums and a performing arts space, have been drafted by some of the world’s best architects.

You might wonder why a space would take the step of naming itself after the most famous and perhaps most beloved art gallery on the planet. The reason is that the Louvre Abu Dhabi is part of a 30-year partnership with the French Government and enjoys a special relationship with the famous gallery.

There are already several outstanding works on loan from the Parisian Louvre and other French galleries such as the Musee d’Orsay, and it is expected there will be many more over the years to come.

The Architecture of the Louvre Abu Dhabi

The Louvre in Abu Dhabi is a direct contrast to the elaborate architectural style of its Parisian cousin. So as to blend in with its ultra-modern surroundings, the Louvre Abu Dhabi is sleek and sophisticated, described as a “floating dome.”

In light of its aims to blend the East and the West, the Louvre Abu Dhabi’s French architect, Jean Nouvel, has drawn much inspiration from the Middle East. Its web-patterned ceiling allows for speckled sunshine to stream into the gallery and is said to represent sunshine peering through the leaves of a date tree. It is a truly remarkable sight and feat of engineering. 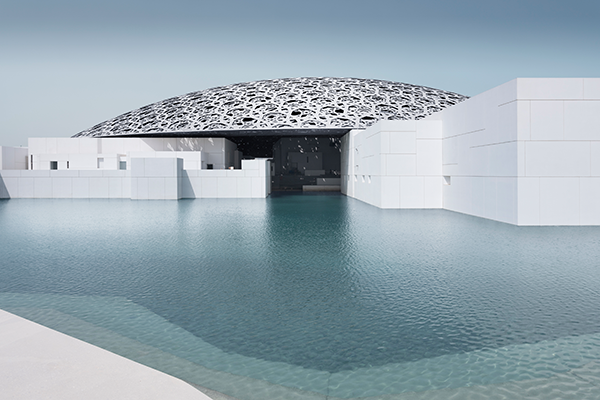 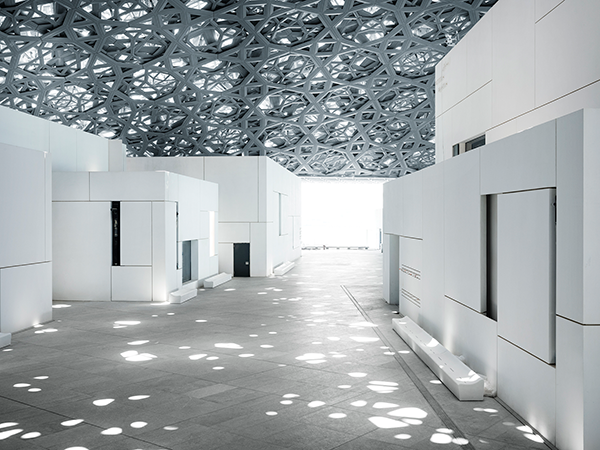 Famous Works of Art at the Louvre Abu Dhabi

While the building itself is stunning, arguably, it is what is inside that is even more culturally and historically important. There are almost 8,000 square meters of galleries within the building, housing works from ancient to modern times.

Some of the most impressive artifacts date back to the ancient Egyptian Empire, including an imposing statue of Ramesses II, which is decorated in hieroglyphics.

The more recent works are no less impressive and perhaps even more culturally significant. Currently, the Museum houses a stunning selection of pieces of the world’s great artists, including Vincent Van Gogh’s Self Portrait (1887) and Leonardo da Vinci’s La Belle Ferroniere (1490 – 1495).

Perhaps keeping with Abu Dhabi’s reputation as a multicultural metropolis, the exhibitions are from all over the world. The world’s religions inspire many, and each tells a fantastic story about the world.

Will It Be as Famous as Paris?

Whether the Louvre Abu Dhabi will ever be as famous or as widely respected as its big sister in Paris remains to be seen. But for now, it is undoubtedly an incredible addition to this seemingly unstoppable city and a must-go destination when you fly Emirates to Dubai (Abu Dhabi is only an hour and a half away by car!).

Tickets are 63 AED (free for children under 13 years). The gallery is open seven days per week, from 10 am – 8 pm (Saturday – Wednesday) and 10 am – 10 pm (Thursday and Friday). Purchase tickets online at louvreabudhabi.ae/en/buy-ticket

Why You Should Visit Chicago During Winter

Where to Book The Most Epic Glamping Spots Near Chicago

Living in Chicago has its perks—there’s always something to explore, a new restaurant to experience, and unique cultures to take in, but...

Frozen’s Anna and Elsa are Taking Over with a Great Show...